Citizen Watch announced that it had come to an agreement with The United States Tennis Association (USTA) to extend its long-standing partnership through 2020. CITIZEN was the first corporate partner to extend its sponsorship through the completion of the strategic transformation of the USTA Billie Jean King National Tennis Center (NTC). The new deal provided CITIZEN with expanded brand visibility throughout the USTA Billie Jean King National Tennis Center grounds and an enhanced presence on US Open digital platforms, while continuing its position as the Exclusive Timekeeper for the tournament. CITIZEN also became the Official Timekeeper of the Emirates Airline US Open Series and now has a presence at all of the U.S.-based Series’ tournaments. In addition to CITIZEN’s presence within the US Open and Emirates Airline US Open Series, the brand has plans to be integrated into the USTA’s future “Home of American Tennis” in the Lake Nona region of Orlando, Florida. 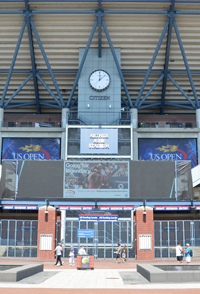 CITIZEN has been a sponsor of the US Open for twenty-four years and the new deal will take the relationship beyond the 50th Anniversary of the US Open which will occur in 2018.

The 2014/2015 transformation of the USTA Billie Jean King National Tennis Center yielded additional exposure for CITIZEN. In 2015, a CITIZEN clock was presented on the façade of Arthur Ashe Stadium. There was also eight new double-sided clocks throughout the Club and Promenade level of Arthur Ashe Stadium. Additionally, clock towers can be found throughout campus during the two weeks of the U.S. Tennis Open and digital match clocks on the courts.

CITIZEN WATCH is a true manufacture d'horlogerie with a comprehensive manufacturing process that extends from creating a watch’ s individual components to its final assembly. The company operates in more than 100 countries around the world. Since its founding in 1918, CITIZEN have held the belief of “Better Starts Now” — that is, no matter who you are and what you do, it is always possible to make something better, and now is the time to start doing it. Sharing this belief, we have made watches, invented and improved technologies and explored the future of watches such as our proprietary light-powered Eco-Drive technology, which originally debuted 40 years ago, and state-of-the-art satellite-synchronised timekeeping.