CITIZEN is proud to announce the launch of the two new SATELLITE WAVE GPS F990 models that are capable of syncing with GPS satellites in space to set the correct times and time zones. 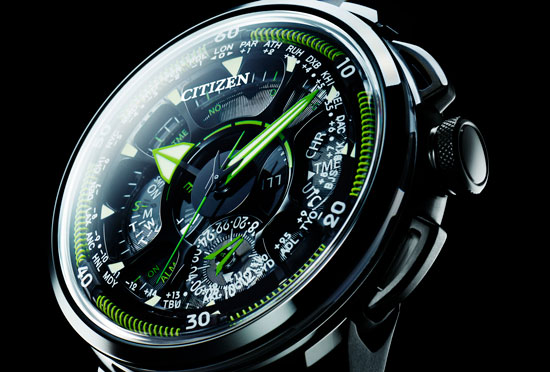 Launched in 2011, the original Eco-Drive*2 SATELLITE WAVE was the world’s first light-powered watch that receives time signals from satellites to always show the accurate time—anywhere on the globe.

As an improved version of current F900, it doubles the speed of minute and hour hand spinning compared to the previous model. These new models also inherit the design concept of original SATELLITE WAVE model, which became an epic timepiece, while improving durability by adopting Super Titanium™*3 case.

<About CITIZEN WATCH>
CITIZEN WATCH, marking its 100th anniversary in 2018, is a true manufacture d'horlogerie with a comprehensive manufacturing process that extends from creating a watch’ s individual components to its final assembly. The company operates in more than 130 countries around the world. Since its founding in 1918, CITIZEN have held the belief of “Better Starts Now” — that is, no matter who you are and what you do, it is always possible to make something better, and now is the time to start doing it. Sharing this belief, we have made watches, invented and improved technologies and explored the future of watches such as our proprietary light-powered Eco-Drive technology and state-of-the-art satellite-synchronised timekeeping.

*The final design and specifications are subject to change without notice.

*The availability, specifications and related information such as product code for the models featured in this site, may vary by markets. If you would like to know more details, including the availability of this products in your area, please select your "Local Website" from our global site.